When singer-songwriter Charlie Imes penned the rhyme “I’m leaving behind a trail of sand, bringing my beach all across this land,” he didn’t just have the basis for the title track of his forthcoming album. He summed up his approach to life.

Imes comes by his coastal vibe honestly. He honed his craft on the beaches of California from an early age, entertaining friends around the fire pit with his guitar, songs and stories. But dreams of a music career got sidetracked by office work, the launch of a legal services firm and a brief stint in San Diego politics.

It was surviving stage 3 colon cancer and a serious bout of diverticulitis a little more than 10 years ago that brought Imes back to music. He was in the midst of a painstaking recovery when his doctor advised him to eliminate stress from his life. So he ditched the suit and tie, strapped on his guitar and has never looked back.

His performance style has stayed true to those early times. Whether imparting his laid back, jazzy folk rock sound or directly addressing his audience, Imes is a above all storyteller. The songs he chooses, whether his own or borrowed from other musicians, speak to his life experiences, nuggets of which he shares with his audience. 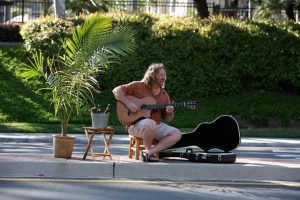 “Whatever song I sing, it has to touch my soul,” Imes explains. “Whether it’s a song I wrote or someone else, it has to resonate with me and speak to my heart. It tells a story I want to tell – and one that I think people want to hear.”

Imes quickly became a fixture in the San Diego music scene. He performed at the likes of the House of Blues and Humphries and was a regular at Croce’s Park West, a restaurant and club owned by the wife of music legend Jim Croce.

In 2008, Imes recorded his first CD, “On an Island.” Self-produced with the help of friend and fellow musician Jeff Berkley and featuring a such venerable musicians as Laurence Juber who played with Paul McCartney and Wings and Jim Soldi, who played with Johnny Cash, the album touched on the universal themes of love and escapism with a few quirky tracks thrown in for good measure. “On an Island” was nominated for a 2009 San Diego Music Award in the category of Best Americana or Country Album.

In addition to nurturing his own career, Imes co-founded Oasis House Concerts, an intimate San Diego music venue at which he hosted both local and national acts. His own performances and the stellar reputation of the Oasis cemented his place in the local music scene.

Along the way, his laid back vibe struck a chord with a group of like-minded beach music enthusiasts who invited him to Key West during a festival called Meeting of the Minds where he greatly expanded his fan-base. Thus began an annual pilgrimage to Florida, which Imes increasingly peppered with gigs at both bars and house concerts along the way as his reputation grew. Last year, Imes “forgot” to go back to San Diego, taking up residence on the Gulf Coast, enticed both by the beauty of the beaches and the professional opportunities.

House concerts have proven to be the perfect venue for Imes. Unlike bar gigs, these shows provide an opportunity for him to tell his stories, musically and otherwise, to an attentive audience. He has become a regular at house concert locations across the country with more added each year.

“House concerts afford the opportunity for the listener and the artist to forge an intimate connection,” Imes says. “It’s such a friendly atmosphere in which to perform. I really enjoy interacting with the audience on that level, telling the tales behind the songs and giving people a peek into the writing process.”

The hosts of these shows have become like an extended family for Imes. They offer him a bed and often insist on showing off their town during his stay, be it Pittsburgh, Chicago, Seattle and places in between. Many extend the offer for him to return and play each year.

Imes released a second album in 2014 titled “Summer’s Here,” with a more stripped down, acoustic sound that pays homage to those days around the fire pit. The CD includes the single “Drive America,” which became an anthem of sorts for Imes, giving a nod to his yearly trek across the United States. Songs from both albums continue to receive considerable play on TropRock and other Internet radio stations across the country.

Back in the studio, Imes once again has assembled an eclectic mix of songs for his Gypsy Soul CD. In addition to the title track, original tunes include “Sunshine on a Rainy Day,” “I Can Do It” and “Dancing in Your Bucket Seats” – which recalls the days of classic cars, cruising and rock ‘n’ roll radio. There’s also a bonus Christmas song that conjures up images of family holiday gatherings combined with a message of peace and goodwill that seems especially poignant today.

Imes also pays tribute to such classics as “Walking My Baby Back Home,” a song written in the 1930s made famous by Nat King Cole and Jackson Browne’s “Something Fine” and renders his own interpretations of a number of tunes by renowned San Diego songwriters like Berkley Hart, Rob Mehl and Christopher Dale, among others. Some of these friends, including Jeff Berkley who co-produced this and Imes’ other albums, are among the stellar line-up of musicians that contributed to Gypsy Soul.

“I want an album that is musically diverse and interesting, not some cookie cutter collection of songs,” Imes explains. “These are tunes that I think people will like and I’m excited to tell these stories to current fans and new ones that I will hopefully make on the road.”

Producing a CD without the benefit of a deal with a recording company is not for the feint of heart, Imes admits. He currently is inviting fans to participate in a crowd-funding effort to help cover the costs of production and manufacturing.

“I set the bar high for myself,” he says, “I want to produce a CD that I would want to listen to. Doing it this way, I can guarantee that it is up to my standards. By not having to answer to anyone else I can stay true to my art, to myself and to my fans. Life has treated me very, very kindly. I am grateful for the chance to do something that makes me happy – and hopefully brings happiness to others as well.”

May 30
Isle of Palms
Jacksonville FL

We may use cookies, beacons (also known as pixels), and other similar technologies (together "cookies") to offer you a better experience, serve you more relevant ads, and analyze usage. By continuing to use this application, you consent to the use of cookies in accordance with our Privacy Policy Close